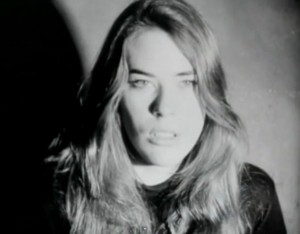 The author, painter, actress, and cult move star Mary Woronov first came in contact with the Warhol circle when she was an art student at Cornell University. At college, she became friends with the poet David Murray and his friend Gerard Malanga, who made a short film with her in Ithaca, New York. When her class was sent on a studio visit to Warhol’s Factory, Malanga immediately invited her to be in a Warhol film; “‘Andy’s doing something called Screen Tests,’ he whispered in my ear, ‘You just look into the camera for fifteen minutes. Murray’s already done one, he was great. Maybe I’ll get Andy to do one of us together, we could set it up right now.'”