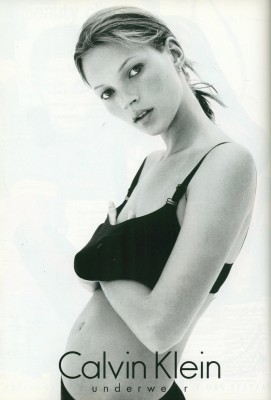 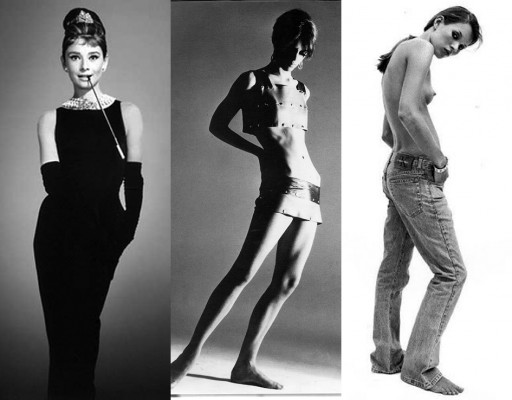 Back in the 17th century when Dutch-boy Peter Paul Rubens was doing his Baroque thing, lots of peeps were starving. So he thought about big girls and said, That’s Hot. Then it was the 20th century and in Postwar America a lot of people had a lot to eat. Thanks to Industrial Food (yes, The Factory’s war against The Farm, again!) government subsidies for Archer Daniels Midland and friends, and McDonald’s mass distribution of high-fructose corn syrup into the bloodstreams of every vehicle occupant on every freeway on-ramp, it became pretty easy to be large. Large wasn’t so hot anymore. So Anna Wintour said, Oh, thin? That’s hot!

In praise of Kate Moss

In 1993 Kate Moss launched a massive new advertising campaign for Calvin Klein. Striking out against the athletic models of the day, like Cindy Crawford, Elle Macpherson, Claudia Schiffer, and Naomi Campbell, Kate Moss ushered in a more elfin physique. Moss look was dubbed Heroin Chic by some. Then president Bill Clinton took the trouble to dis the style. I’ve always loved finding the power in a small package! It’s just more efficient, isn’t it?