Edie Pink / Twitter has locked me in a mental hospital

Yesterday I followed 207 of my @WarholMOOC classmates on Twitter. I thought it might be a nice way to find common interests and keep the conversation going beyond the 2 weeks left in @WarholMOOC. Apparently my classmates didn’t agree. Today Twitter informed me that my account “has been suspended for aggressive following.”

My father (Francis Minturn Sedgwick)(aka Fuzzy) was a horrible man. Who I loved. And desperately wanted attention, affection, and validation from. He was remote and inaccessible. And a monster. When I accidentally walked in on him cheating on my mother, he had me drugged to try to cover it up. My father abused me physically, sexually, and psychologically. The Sedgwick gene pool is pretty awful. Maybe in some way it wasn’t his “fault.” Monster, victim, or both, what I do know is that no one could have given my worse preparation for living in this world than he did.

One of his favorite things to do was to have me (and my brothers Minty and Bobby) locked up in mental institutions. I was committed to many institutions on many occasions. In fact, that asshole Lou Reed loved to make jokes about my mental health.

Well, now Twitter has taken up where my father left off. I thought in my Twitter Resurrection I could get things right this time. Live a better, healthier, more sustainable life. And now Twitter locks me in the mental ward just like my father did. Maybe I really was born to die.

They all came down from Cambridge in the middle of the night… She came along with Tommy Goodwin who I was in love with, and at some point, Tommy Goodwin said, ‘Could Edie stay here a couple of days until she gets her life in order?’ She was suddenly in my apartment, a 900-pound gorilla, a very tiny little thing, so spoiled and demanding. At first, to me she was just a pest, just this pesky girl who never emptied an ashtray and sat on the phone smoking all day. And swallowing all those pills. We had to take our clothes outside to make room for hers. She was a pain in the ass. People who are living with you and dirtying your ashtrays and stealing your listerine, you’re not inclined to think how beautiful or how magic they are – but, of course, she was just enchanting and we were all in love with her. But you knew she was such damaged goods by the time we even found her. By that family. That family with the father who as we knew molested his daughters and then it came out that he had touched his sons as well – two of Edie’s brothers killed themselves. That could really mess you up and Edie was so damaged goods.

I’m sorry Danny.
I’m sorry Twitter.
I guess I’ve always been a freeloading princess.
But, like… I’m worth it… right? 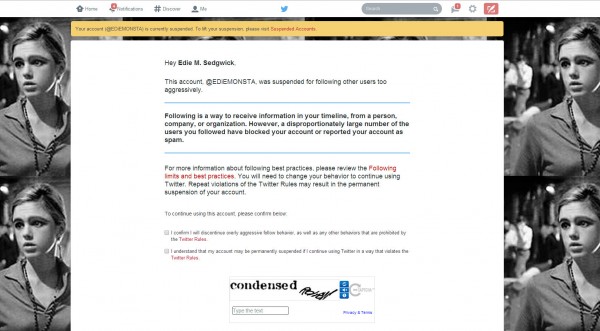 6 Responses to “Twitter has locked me in a mental hospital”