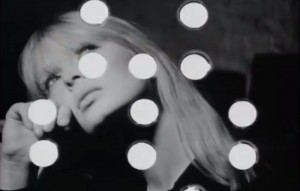 Christa Paeffgen, whose pseudonym ‘Nico’ was coined by photographer Herbert Tobias, rose to fame as a teen model working with powerhouses such as Chanel and Lanvin. However it was her involvement with Andy Warhol and his notorious Factory that created her cult status. Providing the female vocals for the Velvet Underground and producing six solo albums, Nico’s deep melancholic voice was a lingering soundtrack to the 60s and 70s.

By the summer of 1967, Nico was living in California and involved in a drug-ridden romance with Jim Morrison, the lead singer of The Doors. Her final appearances in the Warhol films were filmed in California that fall; in fact, Warhol and his crew obligingly flew out to the West Coast to shoot Nico’s scenes of Imitation of Christ at the Castle, the palatial rock-and-roll residence where she was staying.