I love Viva. She’s a beautiful person and a wonderful actor. In this clip from Nude Restaurant you can see how captivating she is. 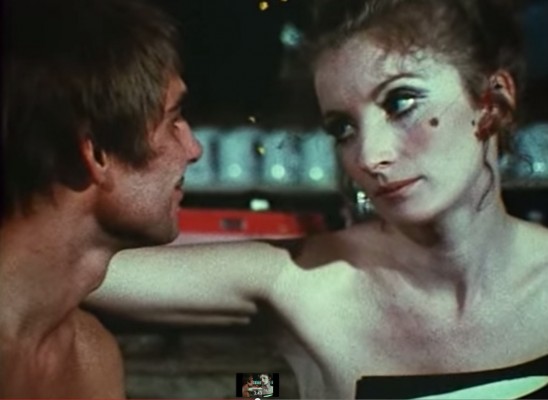 But Nude Restaurant is in color, in focus, and you can even hear the sound. It even has a few cuts, like, editing. And Viva is so much more engaged with her co-star. She’s magnetic really. In Beauty No.2 I’m not really engaged with my co-star. I’m doing more of a juggling act. I’ve got Gino Piserchio in bed with me, Chuck Wein off-screen interrogating me, and then of course, the camera itself, and I’m trying to keep all 3 of those balls in the air at the same time.

Nude Restaurant is so much better a film. But being “better” also makes it more normal, closer to Hollywood, just edgier. Because Beauty No.2 is so much crappier a film, it is more unique. It is about as un-Hollyood as any film has ever been. Like the Screen Tests it is Andy entirely ignoring Hollywood (yes, at the same time that he worships it!) and writing his own cinema grammar from the ground up.

I just found this Nude Restaurant remix. Not sure who made it or when. Probably a whole lot more recent than 1967. Basically somebody took a piece of Viva in Nude Restaurant and folded it in a simple symmetry pattern. There has been so much symmetry in geometric abstraction for pretty much all of human culture. But figurative symmetry is a lot, lot, lot more rare! We care so much about faces! And biomorphic things can, by the tiniest of twists, delight or disgust us. Even in Medusan symmetry, Viva remains amazing.

PS: it’s so hard to type “Nude” as in Restaurant when you keep thinking about “Naked” as in Lunch. Plus the whole feminist discourse on Naked vs Nude.

2 Responses to “Viva in Nude Restaurant”