I was in another film that Andy did called The 13 Most Beautiful Boys in the World… Andy just told me the title and turned on the camera and walked away… Being the egomaniac that I am, I sat there and did a Strasbergian emotional memory. 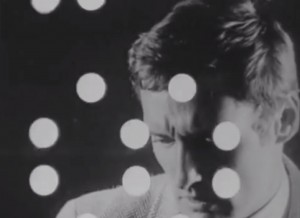 My life was so short. People like Bibbe Hansen or Jane Holzer or Mary Woronov amaze me with their long, productive, lives. And damn! Dennis Hopper? Is it even possible to do all the stuff he did in a single human life? If a cat has 9 lives, then Dennis must have had, like, 50 Edie lives!

The actor, photographer, and filmmaker Dennis Hopper was an early fan and collector of Warhol’s art; Hopper purchased one of Warhol’s Campbell Soup Can paintings from the artist’s first solo exhibition at the Ferus Gallery in Los Angeles in 1962. In 1963 curator Henry Geldzahler took Hopper to Warhol’s New York studio, where he bought Warhol’s Double Mona Lisa painting. In the fall of 1963, Hopper and his wife welcomed Warhol to Los Angeles with a party when he arrived for the opening of his exhibition of Elvis paintings at the Ferus Gallery.